I haven't made it to the "Over Here" exhibition as it's in Perth (and I'm not), but a classmate posted the online catalog - one to keep in mind for my materiality class exercises.

we went along to the Tracing Materiality exhibition on Sunday. the artists had been doing some continuous drawings on large rolls of paper, as well as wall drawings, and working with wax. I'm going to try make it to the talk on the 20th march too. I loved all the work! and there was a stack of drawing books for me to chase up also :)

wow. I went to Grayson Perry's "My Pretty Little Art Career" exhibition at the MCA today. he's so prolific! and varied. there were pots/ceramics, paintings, tapestries, a digital room with interactive displays and screens plus his books and many others on ceramics etc., films, interviews, sculptures. I hadn't seen his pots up close before - only images on occasion. I was thinking how great an example of collage they are - he has text, paintings, photographs, tradition patterning, modern styles mixed with the older styles. so layered! I was getting dizzy just walking around each one to see everything, and I think I missed looking at everything in detail and will need to go back again once I read through the catalog. loved the tapestries - the large ones were there - taking up long walls, and filling the room. such bright colours. I saw the ones from his tv series on social classes. my favourite was marked as a hand-embroidered piece, "Britain is Best", which is quite substantial. so many French knots! and so neatly stitched. perfect rows. I also loved seeing some of the pages of his sketchbooks which were on display. I wish I could have seen more of these. he really seems to think in pictures, and add text notes, rather than making text notes with added images. it was great to see the preliminary sketches / ideas dump for one of the tapestries (from the tv series).

Spans 60 years of Australian Art with over 50 iconic works by 26 artists who have shaped the development of modern art in Australia.

The Triumph of Modernism tells the story of a new identity in Australian art commencing post World War II with artists such as Sidney Nolan, Arthur Boyd, Russell Drysdale, John Brack, John Perceval and Charles Blackman. Later years see the continuing development of modern art in the works of Fred Williams and John Olsen, and in more recent times in contemporary art by artists Imants Tillers, Howard Arkley and Aida Tomescu. The Triumph of Modernism is a rich and representative display of the story of modern Australia, with a particular and deliberate emphasis on Australian identity, although it is just a glimpse into the remarkable collections.

Curated for Hazelhurst by its patron, Edmund Capon, the exhibition provides an opportunity to see some works that are rarely made available for public viewing. “This is the first time Sydney audiences will be able to see the collection in such depth, revealing the strength and diversity it holds” said Belinda Hanrahan, Hazelhurst's Director. Edmund Capon says “My objective here has been to illustrate two themes; firstly the triumph of modernism in Australian art and, secondly, the particular qualities and strengths of the TarraWarra and Besen collections.”

yesterday, we went to the Piranesi exhibition at the State Library of Victoria. his work was amazing! such fine detail in his etchings and prints. there were around 100 works on display, but i found that I was transfixed by the close-up detail of his mark making in the works. when he was younger, the prints were lighter and later in his life he ran his own printmaking business and developed darker, denser prints of imaginative buildings, street scenes and maps. the exhibition included his visions of Rome etchings. most of the buildings did not actually exist outside his mind and works — they are imaginary buildings and cities. he showed amazing skill with depth of vision, fine detail in the clouds and architectural designs and showing darkness and light in the images. Giovanni Battista Piranesi lived from 1720-1778. a statement reported by one of his early biographers, via his Met Museum article shows his love for imaginary architecture:

"I need to produce great ideas, and I believe that if I were commissioned to design a new universe, I would be mad enough to undertake it."

I tried drawing some of the marks in my notebook but found the pen i was using didn't give me enough variation in the lightness and darkness of the lines.

I made a knitted spoon for the upcoming "Spoons!" exhibition at The Slow Club. It’s called "A Spoonful of Threads" (original name was "nice and slow"). I was thinking of a slow / handmade theme – slow baking, stitching, knitting. I was going to do stitching but ended up knitting. it's using three stitches — knit, purl and knit-from-behind, in random order to give the holes some texture. the wooden spoon is made of birch wood and I used red embroidery thread. it was a short callout—so I made it over the weekend. the exhibition runs from May 12-24th.

The Slowclub has since changed names to The Snug.

here’s the flyer for the Spoons! exhibition (when still called The Slowclub)

I had a listen to the first lecture of Grayson Perry - The Reith Lectures 2013 a couple of weeks ago. I loved his comments and disregard (?) of the artworld and his analysis of International Art English language.

since coming across this, I heard also that Grayson Perry and Brian Eno are working together. I can't wait to see/hear what comes of this collaboration!

the BBC blurb:
"The award-winning artist Grayson Perry presents the 2013 BBC Reith Lectures, titled Playing to the Gallery. Across four programmes he discusses what makes him an artist, the limits of contemporary art, how to gauge the quality of new artworks and the future of the avant-garde."

I see that the first lecture is also available on youtube

this weekend in the UK the "Subversive Stitch Revisited: The Politics of Cloth" conference was (is being) held. as it's a bit far to go from Australia, I missed out on attending the lectures. their twitter feed mentions the sessions will be uploaded as podcasts soon, so I shall try to take a listen to them. I have a copy of the original book, "The Subversive Stitch: embroidery and the making of the feminine (1984)" by Rozsika Parker, though I have only browsed through it. I hope to read more over the Christmas break (along with Colour book).

here's an image of the flyer: 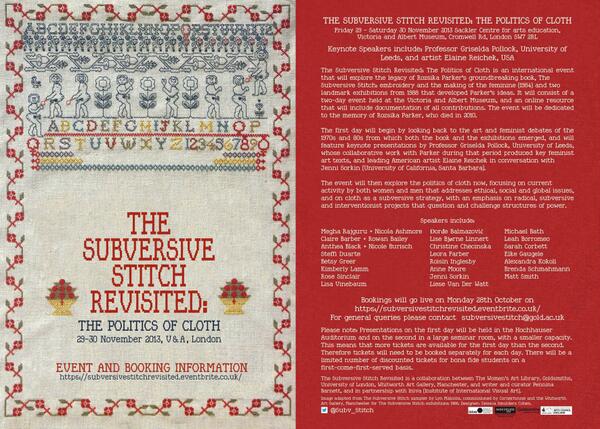 event details, from the ticket site:

today I went to the Art Gallery of NSW and saw "The Sydney Moderns" exhibition. I loved the "colour music" works of Roy de Maistre - I think these would translate well to textiles. like weaving sounds and colour. he did a lot of work based on synaesthesia. I was at the gallery with my sister and 10 month old niece, who was very excited - singing and dancing in the gallery - so we walked quickly through the exhibition so as not to disturb others viewing the works. I hope to go back and see it again and spend some more time looking at the paintings. De Maistre also did some paintings based on the colour wheel.

art
BAM - Bangkok Art Map - BAM is a printed art map available at galleries, hotels, art-cafes and various other places around the city. there seems to be a different issue each month. I found a copy of the 05.2011 version at the Kathmandu Photo Gallery off Silom Rd in Bangrak. the website has art listings and information also and is definitely worth checking out - you can even download a pdf version of the current BAM if you don't find one on the soi Kathmandu Photo Gallery - there's books, art prints, and a gallery upstairs. it's a great old pre-war building, painted pale green - which reminds me of the smaller rooms in the old RSL halls in Brisbane in the 1970s where we did ballet classes - even the same pale green paint on the wall boards - it's very fresh and colourful. owned by well-known Thai photographer Manit Sriwanichpoom and artist/filmaker Ing K. Electrofringe is now calling for proposals for the 2009 festival. We are looking for creative expressions from artists, sound artists, performers, media makers, digital filmmakers, researchers, cross-artform practitioners, curators, producers, writers, experimenters, enthusiasts and anyone who doesn't fit these boxes.

The 4th annual Carnival of e-Creativity (CeC 2009) is scheduled to be held February 27 to March 1, 2009, in the sylvan spaces of Sattal Estate, just above Bhimtal, near Nainital, in the Lower Kumaon of the new Himalayan Indian state of Uttarakhand.

As always, this will be about Presentations, Performances, Exhibits, Meetings, and Screenings, involving direct and indirect participation of e-Creative Practitioners of all description from around India and the world, spread over 3 days of intense private, and also public, creative interaction.

Organizers :
The Academy of Electronic Arts (The AeA) is a Private Trust that serves as a learning, sharing, mentoring, networking, benchmarking, empowering and broadly inclusive, but non-educational, institution.

Friday, February 27 (time to be announced)

SCANZ 2009: Raranga tangata
The Weaving Together of People

Raranga tangata refers to the weaving together of people, a phrase used to describe the internet and adopted by Sally Jane Norman and Sylvia Nagl in their work. The aim for SCANZ 2009 is to weave an enduring fabric of people and technology, located in this place: Taranaki, Aotearoa New Zealand, Pacific Ocean.

The residency themes are Environmental Response and Participate/Display. Occurring along side the residency are a two day symposium (February 7 and 8), presentation evening & opening event (February 7), and curatorial workshop.

Squat Space was born from the energy of artists and activists of the Broadway Squats.

SquatSpace opposed the standard "pay-as-you-show" system used by many high-rent artist-run-galleries in Sydney. Exhibiting was free, with artists usually becoming involved in the life of the squatting community in some way.

After the immense success of "BF08 UNDER THE RADAR", Brisbane Festival 2009 is putting the call out for applications for the 2009 event. A 16 day theatrefest within a festival, BF09 UNDER THE RADAR celebrates the creation of new work, taking risks, self discovery and pushing the boundaries!

BF09 UNDER THE RADAR is now calling for applications from artists and companies with brave, stimulating, relevant and innovative shows that the world needs to see. We're looking for fresh ideas and the crossing of art forms. We‚Äôre after stories that explore the big questions or transform the everyday and mundane. It has to be new - the rest is up to you. Surprise us!

Read more or go to www.brisbanefestival.com.au OR www.myspace.com/bf08utr for more information

From Friday 18 September to Saturday 3 October BF09 UNDER THE RADAR will take over Brisbane's Metro Arts building for the third time, aiming the spotlight at young and emerging theatre artists who operate under the radar of the mainstream.